To share your memory on the wall of Doris Frasher, sign in using one of the following options:

Friends received by the family on Saturday December 29th from 12-2 P.M. at the Brunner Funeral Home, 156 Robinson St., North Tonawanda where services will be held at 2:00 that afternoon. Interment will be at Brandy Camp, PA.

Doris retired from the Durez Plastics Company in 1980.
Read Less

Receive notifications about information and event scheduling for Doris

We encourage you to share your most beloved memories of Doris here, so that the family and other loved ones can always see it. You can upload cherished photographs, or share your favorite stories, and can even comment on those shared by others.

Posted Jan 29, 2019 at 01:35pm
I just found out about the passing of Doris today and I wanted to express my condolences to Jim & Dave and their families. Doris was a special lady whom every time I visited with was always warm and kind. The adjective I always thought about when I seen her was classy. RIP Marshall Duguay
Comment Share
Share via: 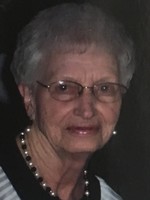