To share your memory on the wall of Richard Eisenhauer, sign in using one of the following options:

Ike was a proud father and grandfather, some of his favorite times were spent square dancing, gardening, collecting antiques, on vacations and get togethers with his friends and family and playing with his grandchildren. He enjoyed spending the winter months in his home in Florida.
He played the role of Santa for many years at Rescue Fire Co.
He is survived by his beloved family all of North Tonawanda, Sons; Mike (Ruby) Eisenhauer, Thomas (Deb) Eisenhauer, Granddaughter Deanna (Ryan) Caldwell, Grandson Adam Eisenhauer and Great Grandsons Zachary and Matthew Caldwell

A celebration of life ceremony will be held for Ike and his late wife Joie this coming Spring. Details will be posted
Memorials may be made to the charity of your choice.
Read Less

Receive notifications about information and event scheduling for Richard

We encourage you to share your most beloved memories of Richard here, so that the family and other loved ones can always see it. You can upload cherished photographs, or share your favorite stories, and can even comment on those shared by others.

Nurses from 15South sent flowers to the family of Richard Henry "Pa Ike" Eisenhauer.
Show you care by sending flowers

Posted Jun 21, 2019 at 02:37pm
Tom and Mike,
I just learned of Pa’s passing from Don Seymour yesterday, JUNE 20 th. I will always remember him for his good nature and was a great guy to be around. I wish I could have shown him my Texaco garage inside my garage, I think he would have appreciated seeing some of the memorabilia l purchased from him. I will also remember those times we unloaded Xmas trees and worked the lot on Bailey Ave. They were the best of times. He may be gone but he certainly won’t be forgotten.
Condolences,
John Rowles
Comment Share
Share via:
N1

Posted Dec 16, 2018 at 06:06pm
We are so sorry to hear about your loss. It was a pleasure to take care of Richard. We send condsolences to your family.

Nurses from 15South purchased flowers for the family of Richard Eisenhauer. Send Flowers

Posted Dec 09, 2018 at 09:57am
My sincere condolences to "Ike's" family. I knew him from his Deerwood days, it was always a pleasure to talk with Ike. I am honored to call
Ike my friend, he will be missed. R I P " Ike" .
Comment Share
Share via: 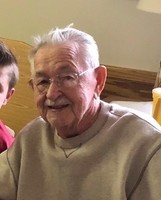 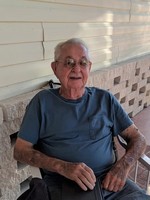