To share your memory on the wall of Roy Meyers, sign in using one of the following options:

Roy retired from Local Building Trades as a Tile Finisher. He proudly served in the United States Airforce, stationed in Japan as a member of the Military Police. His big smile and robust laugh, not to mention his crazy sense of humor, will be missed. Roy donated his body to the University of Buffalo to help those who help us. A Memorial Mass will be held at a later date.
Read Less

Receive notifications about information and event scheduling for Roy

We encourage you to share your most beloved memories of Roy here, so that the family and other loved ones can always see it. You can upload cherished photographs, or share your favorite stories, and can even comment on those shared by others.

Posted Nov 21, 2020 at 02:40pm
My Deepest Sympathy.Many Fond & Loving memories .Saturday morning breakfast and Roys wonderful cheese egg omelets and him picking me up teasing me and calling me Tumor lol Always remember days spent with the Meyers family. I am so sorry Joanne,Leslie and Griffin.
Comment Share
Share via:
D

Posted Nov 21, 2020 at 02:36pm
I wasn't notified.I am so sorry.Fond memories of Saturdays spent with the family.Always loved and cherished. My deepest sympathy.
Comment Share
Share via: 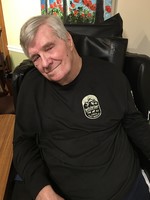